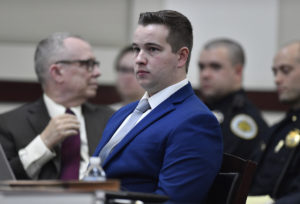 Newly uncovered police records reveal that nine months before Officer Andrew Delke shot and killed Daniel Hambrick, he was reprimanded. But not for use of force. It was a night when Delke didn’t pull his gun. And his supervisors criticized him for it.

These records provide a rare glimpse into the mind of police officer struggling to make sense of when to use his gun, and the mixed messages he received from his training, his supervisors and an increasingly wary public. Women’s March Tennessee shifted away from Nashville for the first time this year, and sacrificed the size of past turnouts in exchange for easier access for rural participants.

The partisan divide over impeachment comes as no surprise. But a bit of a gap has also opened up between the Tennessee senators who are engaged in the impeachment trial. It’s just a handful of pediatricians in Tennessee responsible for making Tennessee one of the highest prescribers of antibiotics in the country. A new study from Vanderbilt University Medical Center and the Tennessee Department of Health finds 2% of pediatricians account for 25% of the antibiotic prescriptions in the state. The Tennessee Senate reconvened Tuesday and jumped into one of the most controversial issues left over from last year.

Lawmakers approved a measure that would allow faith-based adoption agencies to refuse child placements based on moral beliefs.