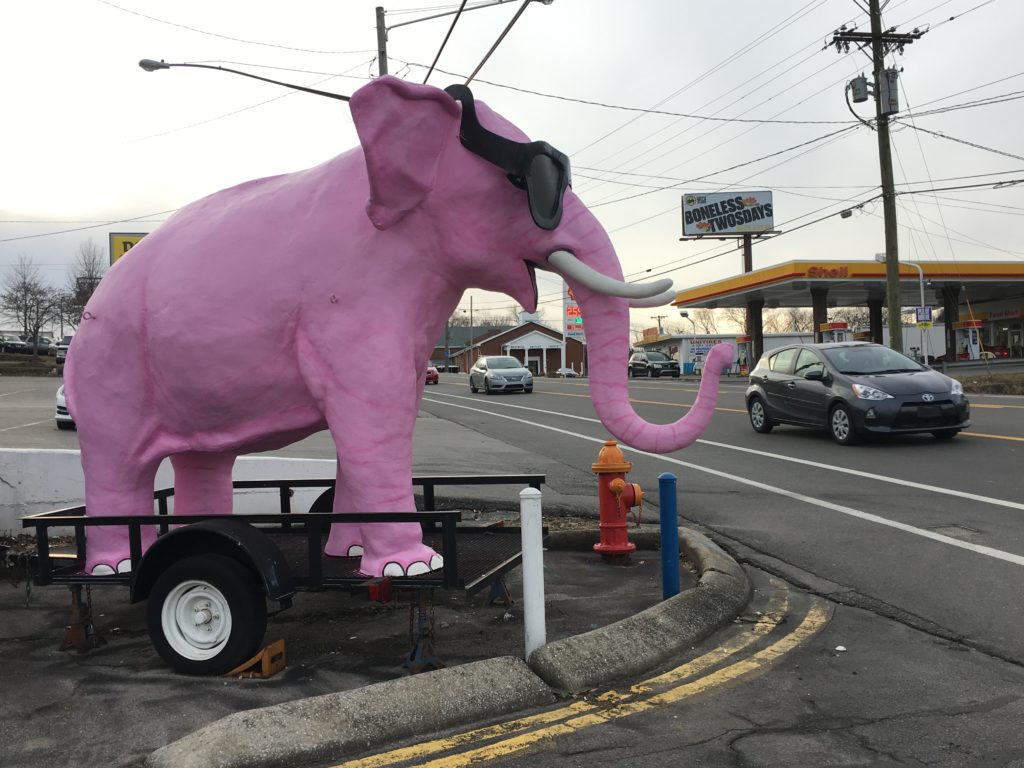 The Charlotte Pike pink elephant is nicknamed Pinkie. The owners of University Motors are unsure whether Pinkie is a boy or a girl.Sara ErnstWPLN News
Share:

WPLN listener Holden Thompson has known this pink oddity for nearly all his life. And so, he felt compelled to ask
Curious Nashville:

“In the area around Nashville, I have seen several large pink elephants. I’d like to know the story behind these unusual sights. Thanks.”

“Growing up, regularly, we used to drive by a pink elephant — there used to be one on Highway 12,” said Thompson. “I asked my parents when I was small what it was doing there. They had no idea. This is a question I’ve had since childhood, and never had answered.”

In finding the answer, these pink elephants led to a strange history of shuffling owners, brothers with nearly the same name and a crash course in the hustle of small business brand-building.

The first step was simple Google search, revealing that “Pinkie,” as they call it at University Motors, isn’t one-of-a-kind. There are four known pink elephants in the Middle Tennessee area.

Although the pink figures look nearly identical, they each have unique personality traits.

In the summertime, the pink elephant of Cookeville — “Ellie” — can be seen fitted in a blue-and-yellow polka dot bikini, painted onto its torso. And the elephant in Cross Plains has icy blue eyes and grasps a pink cocktail glass in its trunk.

The one other pink elephant in Nashville is hidden from street view on the putt-putt course of Europa Go-Karts & Golf.

In all likelihood, these elephants originated in Sparta, Wisc. That’s where
Sculptured Advertising, now known as FAST Corporation, has long specialized in fiberglass figurines.

But in reaching out to the company,
Curious Nashville realized an interesting wrinkle in the history of pink elephants: There have been two different statues at the dealership.

The original, measuring 12 feet, was a classic FAST Corporation design. The company’s general manager, Darren Schauf, said that old photos show that it matches: the shape of the ears and sunglasses, the closed mouth, and the detailed wrinkles are all telltale signs that it came from a FAST fiberglass mold.

But the new Pinkie on Charlotte Pike?

“I don’t think it’s ours,” Schauf said. “And it looks a little smaller than ours.”

In the 1980s, McPherson Motors resided on the property that eventually became home to the current University Motors. Owner Roy McPherson erected the first elephant, whose name remains unknown.

The McPherson name popped up around the intersection where Charlotte meets White Bridge Pike. Brothers Roy and Ron McPherson set up shop across the street from each other — McPherson Motors on one side and McPherson Menswear on the other, which still remains today (under new owners).

In the early days of McPherson Motors, the pink elephant wasn’t the only creature on display. The dealership was a veritable zoo of various fiberglass animals, including a bull, a fish and a gorilla.

Among all these sights, the pink elephant far outshined the others as the standout favorite, according to Roy McPherson. The pink elephant became the beloved mascot of the community, prompting McPherson to make it a permanent part of the lot and purchase the figure after years of renting animals.

“I had a lot of different type of animals,” said Roy McPherson. “Everybody always would ask, ‘Where’s the pink elephant?’ So, I finally bought one. But it was much larger than the one [currently there]. It was real fancy.”

Its popularity even led to celebrity appearances at children’s birthday parties. After McPherson Motors closed, the elephant vanished along with the business. Roy McPherson explained that he sold it  back to the rental company once the business closed.

Over the years, the property hosted various car dealerships before University Motors. But the notoriety of the pink figure remained.

“People knew this place as the place with a pink elephant,” Ratliff said. “When our owners moved our dealership here, they found a guy to make a pink elephant because everyone was asking us about it.”

Pinkie has seamlessly integrated itself as an essential part of their brand — even in the business logo on their website. Employees have company fleeces with a pink elephant stitched on the front.

Ratliff says he is convinced that Pinkie attracts patrons.

“The pink elephant became a landmark in Nashville,” Ratliff said. “Everybody wants to take a picture of it. We’d give them information on how to find us and they’d ask if that’s where the pink elephant used to be.”

what monster stole the sunglasses off the pink elephant on charlotte— J.R. Lind (@jrlind)
July 2, 2014

Pinkie the elephant’s safety and wellbeing is of great concern to its fans.

In 2014, posts on Twitter said that Pinkie’s glasses had gone missing. According to some fans, this was a theft of malicious intent. But the police weren’t called, and Pinkie today wears a new pair of black sunglasses.

University Motors has been in business for 18 years, with the pink elephant around since nearly the beginning. The glasses may have disappeared at one point, but it’s safe to say that Pinkie is here to stay.