This is a less common look for poison ivy
Listen
/

The best way to treat poison ivy is to avoid touching it in the first place. But that’s tricky, given the many faces the rash-inducing plant can have.

It was a close encounter in 2012 that made John Jelesko so interested in poison ivy as a niche academic pursuit.

He was cutting up a downed tree with an electric chainsaw. And the associate professor at Virginia Tech knew the axiom: “leaves of three, let it be.” What he didn’t realize was that his power cable had been dragging through poison ivy. So at the end of the day, as he coiled the cord around his palm and elbow, he inadvertently launched a career-bending science experiment.

“Within 48 hours, I had your classic case of poison ivy on my arm. And as a scientist, I said, ‘this is interesting, how bad can it be? I’ll just leave this untreated,'” he recalls, sheepishly. “In about two weeks, I had learned just how uncomfortable poison ivy rash could be.”

It was enough to spark years of research into a plant he calls a “familiar stranger,” given that it appears in almost every state in the continental U.S. But there’s still little known about its unique properties, like why its leaves sometimes appear with jagged or lobed edges, and sometimes smooth. Here’s what might be called the classic saw-tooth version. But there are other variations, like this slight notching in the leaf. There are “subspecies” of the Toxicodendron radicans, which is the scientific name. But Jelesko says he’s seen different style leaves on the same plant. And while there are other native plants with three leaves, they don’t show the same amount of variability in shape, Jelesko says.

“It’s remarkable,” he says, with a laugh. “There’s just an enormous amount of things with this plant that are currently unknown.”

Oddest of all, poison ivy can sprout up almost like a shrub. 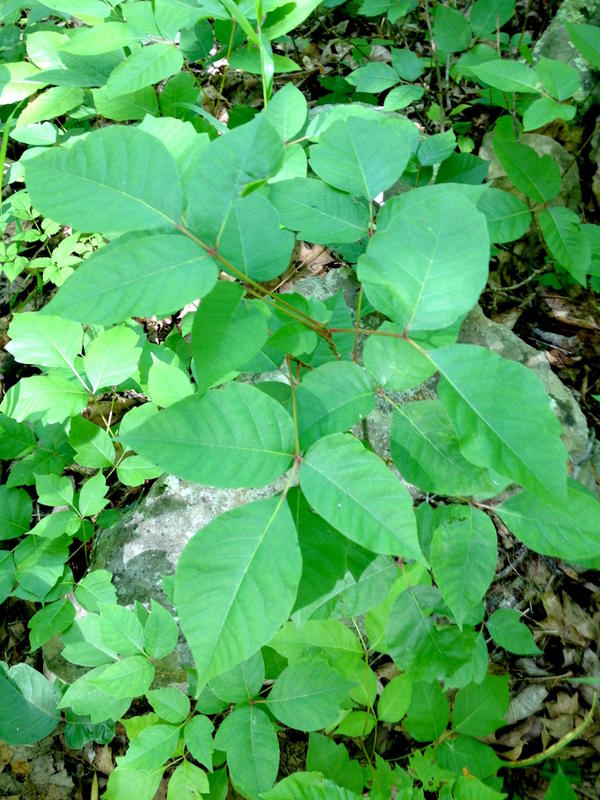 Another rare property that gives fits to hikers and gardeners is the plant’s ability to both grow as a creeping vine on the ground and climb a tree, like in the video below.

If mature enough, the vines can put out branches that can look just like the host tree. So simply pushing aside a branch could make a passer-by pay the next day. Jelesko has even identified a dead tree overtaken by poison ivy on the Virginia Tech golf course.

From afar, it looks like it could be one of the evergreens nearby. Up close, it becomes clear that this is a nightmare of nature.

When the tricky plant wins…

Of course, prevention is the best route. For John Jelesko, he now donns a Tyvek suit and two pairs of gloves when he’s wallowing in poison ivy.