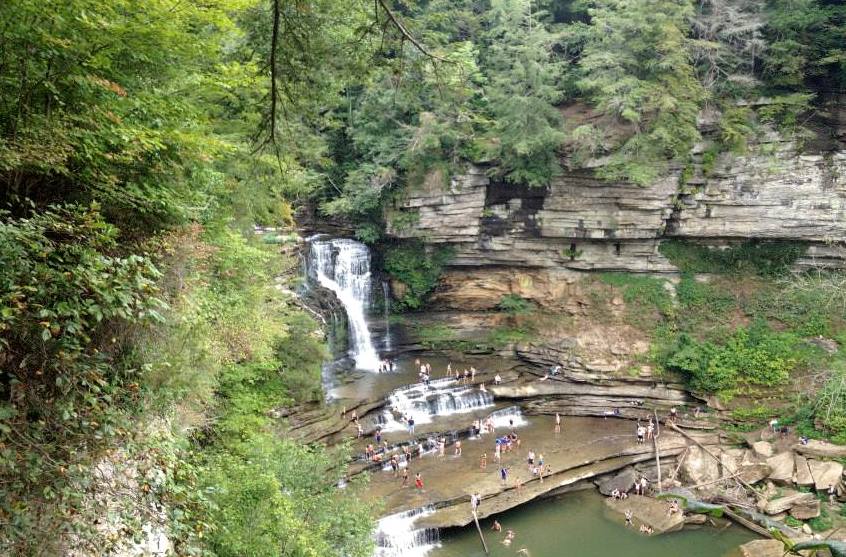 Cummins Falls is one of the state's newest parks. All parks and natural areas are closed now through mid-April as part of statewide social distancing efforts, which were stepped up Thursday.Emily SinerWPLN
Share:
Listen
/

The parents of the 2-year-old boy who died in a flash flood at Cummins Falls State Park last month have started the process to sue the state of Tennessee for negligence.

Their lawsuit, WPLN has learned, will address a key question that’s also being asked by lawmakers and the state government: Why was a flood warning system that was announced two years ago not in place when Steven Pierce was swept away?

A review of dozens of emails between the Tennessee Department of Environment and Conservation, or TDEC, and Tennessee Tech University show enthusiasm for the idea and a consensus that it would be an important safety update. But at multiple points over the past two years, the process stalled, without clarity on who was supposed to take the lead on key decisions.

Cummins Falls, which became a state park in 2012, is one of the most popular natural destinations in Tennessee. Its draw is a 75-foot cascading waterfall and a hiking trail down to the base of the gorge, where families swim in the summer.

It’s one of those places that’s breathtaking even in photos.

But it also has dangers. Storms can surge the water levels in nearby streams, and that can lead to a flood wave coming into the waterfall — even if there’s no rain falling over the park itself.

That’s what happened the day after the Fourth of July in 2017.

Paul Thomas got a phone call from his ex-wife, who had taken their children to Cummins Falls.

“She’d called me to tell me there’d been an accident,” Thomas said. “They were just playing in the waterfall, and she said it was like somebody just flipped a switch. All this water came over the top of the waterfall.”

The family tried to hold on to each other, but Thomas’s son got swept away. He was found by a rescue helicopter and survived, after several harrowing days in the hospital.

But one of his adult relatives did not.

Peggy McDaniel’s body, along with Lisa Michelle Hillian’s, were found by rescue teams in the aftermath of the flood.

“You know, we all reel from the effects of the funeral and the burial process of all that,” Thomas said.

Funding Is A Go

The flood started a months-long process to improve safety at Cummins Falls.

Some improvements have been implemented successfully, like a new protocol that increases communication between park rangers and the National Weather Service, which monitors rainfall in the region.

But ultimately, the state has so far failed to accomplish its mission of installing a flood warning system — despite funding being available and repeated attempts by people involved to figure out what was taking so long.

The emails show how the process started.

In the weeks following the deadly 2017 flood, a group of professors from Tennessee Tech University, led by earth sciences professor Evan Hart, emailed the park manager of Cummins Falls with an idea: They offered to help design a system that would measure the water level flowing into the park.

“It sends a radio signal when the water in the stream begins to rise rapidly,” Hart told WPLN last month.

This system would give rangers a warning before a flood wave arrives of at least one hour, rather than mere minutes.

The park manager at Cummins Falls, Ray Cutcher, was thrilled. He set up a meeting with the professors. Hart sent over a more formal proposal for a warning system, with an expected price tag of $37,000. In September 2017, Cutcher sent this information to higher-ups at the Tennessee Department of Environment and Conservation.

But two months later, Hart clearly hadn’t heard much. The professor emailed Cutcher to ask for an update, which seemed to restart the process.

Another five months later, in April 2018, the professor asked again and confirmed the university had funding ready to help. The park manager said the state’s portion of funding was approved too.

‘Process Stalled At This Point’

There did seem to be progress the following month. In May 2018, someone from TDEC’s procurement office reached out to the professors about which company would install the warning system.

But the momentum did not last, said TDEC Deputy Commissioner Jim Bryson.

But the emails reviewed by WPLN show this isn’t completely true.

A week after that email exchange, Cummins Falls park manager Ray Cutcher continued to communicate with the Tennessee Tech professors about the procurement process. Cutcher said TDEC attorneys were working on creating a memorandum of understanding with the university, although it was unclear from the emails who at the university was responsible for this.

And they all expressed frustration.

“This is, however, taking longer than I thought,” Cutcher wrote, saying he wants to purchase the equipment before the end of the fiscal year in June 2018.

“What exactly do you need from us?” Evan Hart, with Tennessee Tech, replied. They tried to find a time to connect by phone.

Six months later, Hart reached out again: “Is there any news?”

By the end of 2018, the fiscal year had started over and funding for the system was no longer in place.

And a few months later, in early 2019, a new commissioner took over at TDEC. David Salyers made his first visit to Cummins Falls as commissioner in April, nearly two years after the first fatal flood.

“I was like, ‘Hey, how’s the warning system working?’ ” Salyers recalled when testifying in front of lawmakers. “And they were like, ‘What warning system?’ And I’m like, ‘Um …’ ”

The commissioner’s questions restarted the process. Emails in late May and early June show several people trying to figure out where they last left off.

On June 9, Cummins Falls experienced another flash flood. Park rangers evacuated dozens of people to higher ground with about two minutes of warning.

One of the children in the gorge at the time was 2-year-old Steven Pierce of Eddyville, Ky. His parents’ attorneys claim he was “ripped from his father’s arms” during the flood, and his body was found the following morning.

Pierce’s parents are starting the process to sue TDEC, according to their attorneys. Because of pending litigation, Salyers declined to be interviewed for this story.

The drowning has renewed the urgency for state officials. Within two days, TDEC secured approval for an emergency contract with a Utah-based company to install the system. Within about a week, they had the purchase order in hand for $42,500.

The company told WPLN it has not yet started any physical installation.

Paul Thomas, the man whose son barely survived the 2017 flood, says his heart broke when he learned about the latest death.

“I pray for this other family that they find some peace in it,” he said.

After the incident with his son two years ago, attorneys reached out to Thomas to see if
he wanted to sue. He chose not to, he said — in part, because the state said it was putting a warning system in place.

“It’s not going to be my family to do it, but maybe somebody’s just going to have to hold their feet to the fire to do it before another life’s lost,” he said.