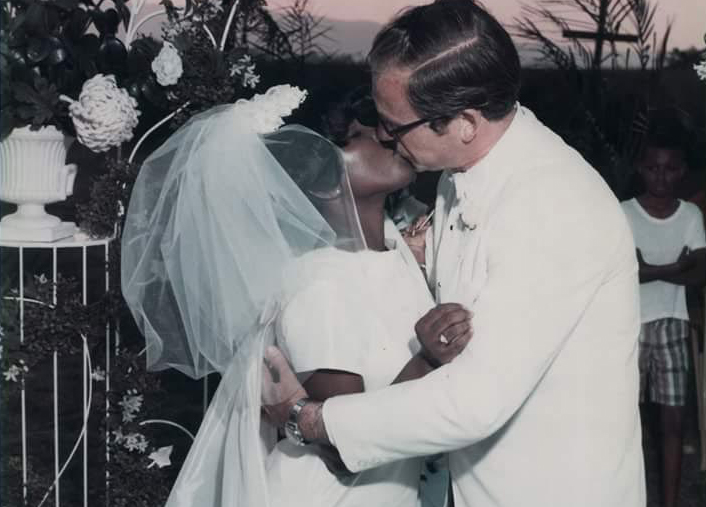 Editor’s Note: This is a shortened story from an episode of the podcast Neighbors. To hear the complete episode, go here.

Gloria and Leroy Griffith met the same way that many couples meet in the South — at church. But when they started dating, they were an unusual pair.

Gloria’s black, and Leroy’s white. It was the late 1960s in Tennessee, and interracial marriage had just become legal in the South. This year marks the 50th anniversary of the Supreme Court case,
Loving v. Virginia, that opened the door for interracial couples to marry in the South.

Gloria remembers the first time she laid eyes on Leroy.

“I had never seen a pastor with a cigarette in his mouth before,” Gloria says.

Leroy was the pastor at the church of Gloria’s mother in Chattanooga. Gloria was quite taken with the young pastor. She saw him smoking outside after his sermon, surrounded by women and thought he was out of her league.

Gloria and Leroy met again a couple of years later when Gloria’s sister was very ill. They got to know each other during hospital visits. Eventually, they went for a walk in the park.

Next it was a movie date. Gloria remembers all the details — Leroy’s blue jeans and blue sweater, matching his blue eyes. She wore a miniskirt and sandals.

An interracial couple was an unusual sight in Chattanooga, and people stared at them. By this point, it was the late 1960s, and segregation was illegal. Still, society had it’s own rules, and Gloria and Leroy were challenging them.

A Shared History Of Activism

Leroy, who had grown up in California, took a bus to Alabama in 1965 and marched with Martin Luther King Jr. from Selma to Montgomery. The experience shaped him so much, that he applied to be the pastor of a black Presbyterian Church in Chattanooga.

Gloria also fought for social justice. Around the time she and Leroy met, she lost her job trying to unionize the nurses at the hospital where she worked.

After about a year of dating, Gloria agreed to marry Leroy. But, her excitement was tinged by a looming reality. It would be a huge risk for her to marry a white man. Her decision could put her entire family at risk. Gloria’s mother sent the couple to visit Gloria’s grandparents and seek their approval.

After a long discussion, her grandfather gave his blessing.

“As we left the house, he raised up his hand,” Leroy says. “He was saying, this marriage is chosen by God, and I’m with you all the way!”

The wedding was on. But, not everyone was supportive.

Even finding a church proved difficult. The church where Leroy worked was too small, so they asked two bigger Presbyterian congregations in town. Both turned them away. They decided to get married outside with a pastor from out of town.

Their engagement even offended people that they didn’t know.

But not all the calls were angry. Some people called because they’d never seen an interracial wedding before, and they wanted to be there when history was made.

“I said, bring your [sunglasses], you’re welcome to come to the wedding,” Gloria says. “It was open to the public.”

Because they’d opened their wedding up to the public, they worried about violence. So, when the big day arrived in August of 1969, one of Leroy’s friends sent a bunch of young men out to block the streets and keep out protesters.

“Their cars ‘broke down,'” Leroy says. “I’m not sure if they got out and pretended they had flat tires or what they did, but they blocked the traffic.”

Married In Peace, But Violence Around The Corner

It worked. About 800 people showed up to the wedding, Gloria estimates, and all of them were there in peace. The event is believed to be the first legal interracial wedding in Chattanooga.

The Griffiths are glad that their wedding drew so much attention.

“The community participated in a divine action,” Leroy says.

“My mother said this to me, when I first told her we were getting married and she realized it was serious. She said, why don’t you all elope?” Gloria laughs. “And I told her this: It is impossible, me marrying Leroy, to elope. I say this is bigger than he and I.”

Even though Gloria and Leroy stayed safe on their wedding day, they were not immune to violence. A year and a half later, race riots erupted in Chattanooga. Leroy protested in the streets, while Gloria sat at home, in their white neighborhood, nursing their new baby. A brick smashed through the window.

Throughout the years, though, one thing has remained constant — Gloria and Leroy are married. And, to this day, they fight for social justice. Together.