A commuter rail idea is taking shape to connect Clarksville and Nashville, with a stop in Ashland City. Northwest Corridor Study
Share:
Listen
/
Details emerged Tuesday about what could be Middle Tennessee’s best chance to add a new commuter rail line. For an estimated $525 million dollars, it would run roughly 40 miles between Clarksville, Ashland City, and Nashville.

This train would make the full trip in 43 minutes, compared to what experts say could take two hours by car by the year 2040.

And trains would run every 20 minutes during morning and afternoon rush hours, which would be far more frequent than other regional routes now run by the Regional Transportation Authority, which commissioned the months-long study public input process.

“There’s other corridors — maybe other alignments — that had more congestion, perhaps, than I-24 going to Clarksville,” he said. “But this particular project has half of the right-of-way already existing.”

Dikes explained that this commuter train could run on a little-used Nashville and Western freight line that’s already built from the Nashville Farmers’ Market to Ashland City, with remnants of an old line running most of the rest of the way to Clarksville.

(There is one version in which the train goes to The Gulch instead of to the farmers’ market. Either way, Dikes suggested the train would run local service in the midday to North Nashville.)

In his presentation, Dikes said the nine or 10 train stations — including a few in North Nashville — could spur major investments including mixed-use “transit-oriented” developments.

“The neighborhoods, and the residents and the people that are going to live near these things are really going to highly impact how they look — ultimately where they are, what they look like, operations and things like that,” he said. “We want this to blend in.”

Dikes said the ongoing Northwest Corridor study considered several types of transit and aimed to flesh out an idea that would be strong enough to attract federal funding. He listed several downsides to other options, such as borrowing a lane from the state highways for buses or investing big in rapid interstate buses. 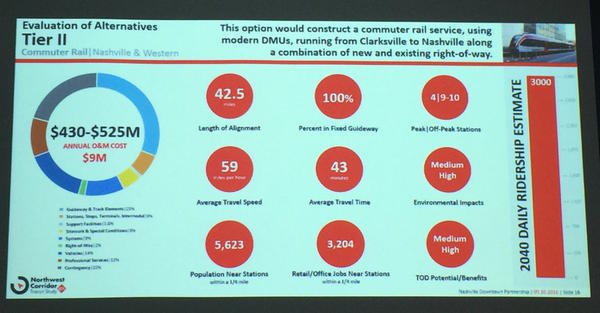 “Of the big time capital investments, this one really makes the most sense,” Dikes said. “It’s not cheap but it has the highest ridership potential. … And it has the most opportunity to do transit-oriented development, because it has the most stations.”

Not ‘Turning Dirt’ Yet

Such a project could take a decade. That’d be a tough wait for state employee Sonia West-Rowson. She rides the bus from Clarksville, but says it breaks down, sometimes once a week.

“If that is something that’s in the works, I would definitely prefer it. I know I could get to work a lot quicker and it would probably be a lot safer,” she said. “I know he said it’s future, way down the road, but I’m hoping it’s very soon.”

While transit officials say commuter rail is the top option from Clarksville, there are bus upgrades possible at a lower cost. And the study team says bus service should be improved in the short-term, including giving buses permission to drive on the interstate shoulder during heavy congestion.

Final recommendations are expected this summer.