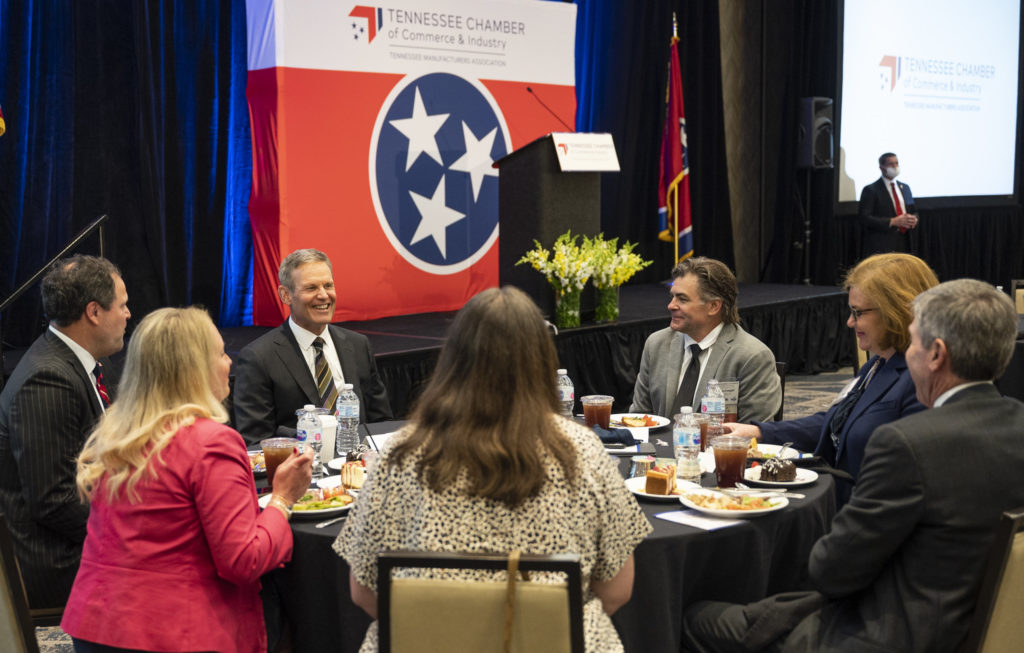 Gov. BIll Lee meets with members of the Tennessee Chamber of Commerce in April. He says his decision to pull out of the enhanced federal unemployment program is because businesses can't fill their openings right now.TN Photo Services
Share:

Tennessee’s decision to cut unemployment benefits by $300 a week stings for many recipients. They say they’re more than willing to work. But at this stage of the pandemic, it’s complicated to find jobs that fit.

Gov. Bill Lee announced this week that Tennessee would join other Republican-led states and opt out of the federal unemployment program in July.

“It felt very patronizing,” says Timbre Cierpke, a harpist from East Nashville. “Like, ‘Pull yourselves up from your bootstraps. You’re being children.’ ”

She’s a full-time musician in East Nashville. Gig workers like her usually don’t qualify for unemployment. But she’s in an industry that was literally forced to shut down.

“Most of us dedicated our entire lives to our craft,” Cierpke says. “We’re in a unique situation of really not being qualified to do a lot of other things.”

State officials say there are some 250,000 jobs available, and employers are struggling to fill them. But many would-be workers would rather keep looking.

“I mean, what are the jobs?” asks Mayam Randolph, who works in accounting at a Nashville-based restaurant chain. “I’m not going to go and work a fast-food job. I’ve been in accounting for a decade now.”

Randolph was laid off early in the pandemic. Now, after a tough year in a hard-hit industry, her company recently decided to outsource its accounting department to save money.

When she first got notice that she’s losing her job in June, she was comforted to realize she’d be getting close to $2,400 a month in unemployment. That’d cover her mortgage and her toddler’s daycare while she found a new position.

And the breathing room would be helpful. It’s a tough time as a mother to be on the job hunt. Her two older kids have had some mental health needs stemming from the tumult of the pandemic, she says.

“I’m a little hesitant going into another job and still handling the fallout of COVID,” Randolph says.

Unemployment insurance is more than a bridge between jobs, especially right now. University of Tennessee economist Marianne Wanamaker says she’s thought of it as “uncertainty insurance.”

“It’s helping you get from a time period where everything seems uncertain to some point in the future where we have more certainty about what our working and living conditions are going to look liked,” says Wanamaker, who served on President Trump’s Council of Economic Advisors.

The extra $300 a week is scheduled to runout nationwide in September. Will cutting the extra money two months earlier in July speed people back into the labor force? Yes, Wanamaker says. But will the head start make a measurable difference to the state’s economy? Probably not.

But opting out does made headway on at least one political priority: It’s a sign to industries looking for labor that Tennessee does what it takes to please businesses.