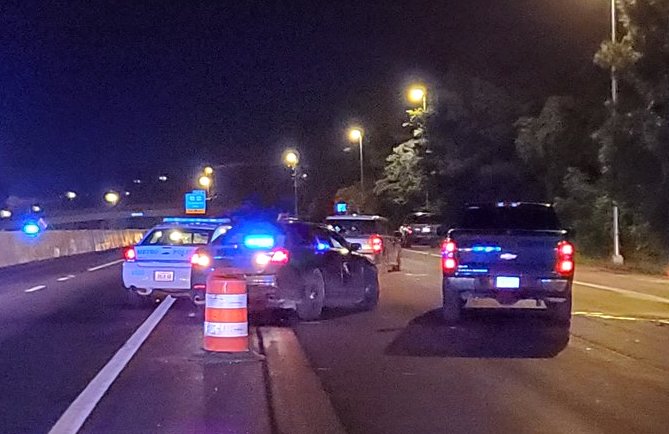 Nashville police officers fatally shot a man Thursday night in what the department is describing as a chase and a shootout that started after a different, off-duty officer was ambushed and wounded.

Three officers fired guns on Interstate 440 and are on administrative assignment while the Tennessee Bureau of Investigation handles the case.

The officers are Terrance Stuckey, Jacob Krispin and David Lang.

The TBI has identified William Johnson, Jr., 48, as the man killed by police gunfire.

Nashville police say the sequence began around 9:05 p.m., when off-duty Officer Darrell Osment was walking his dog in northern Davidson County near Bull Run and Pine Valley roads. Police say he “exchanged hellos” with another man but was then shot in the back shoulder. Osment was able to run away while the man left in a Ford Flex.

The ensuing pursuit began around 9:17 p.m., and included a police helicopter.

The chase traveled through North Nashville. Police say they were twice shot at by the driver, including near the department’s North Precinct and near the intersection of Ed Temple and Dr. D.B. Todd boulevards, where an officer was attempting to use spike strips.

Later, spikes did stop Johnson’s car on I-440 near the Nolensville Pike exit in South Nashville. More gunfire was exchanged, and Johnson was killed. Metro police say they recovered a pistol at the scene.

TBI spokesman Josh DeVine said agents were gathering evidence from two Metro police vehicles and the Ford Flex, as well as collecting more than 50 rounds of gunfire on the interstate. He said the TBI’s role is focused on the fatal shooting on the interstate, and will not include review of the initial wounding of Osment.

Much of I-440 was closed overnight and into the Friday morning rush hour.

Osment, the off-duty officer, has served the department for 13 years. He worked at the police Property and Evidence Facility, and is recovering at Vanderbilt University Medical Center.

“I want to join so many in our community who are sending the best of wishes and thoughtful prayers for the Metro Nashville officer who was injured in all of this,” DeVine said Friday morning.

Metro Nashville Community Oversight Director Jill Fitcheard was at the scene Thursday night. She says her agency, which oversees the police department, plans to launch its own inquiry.

“We’re sure that the investigation will result in the same facts that we believe to be accurate, which is a man attacked an off-duty police officer unprovoked, and that resulted in a county-wide pursuit,” he says. “And officers were forced to deal with a lethal threat.”

The TBI says it will share its findings with District Attorney Glenn Funk, who will then determine whether officers acted lawfully. Funk did not immediately respond to a request for comment.