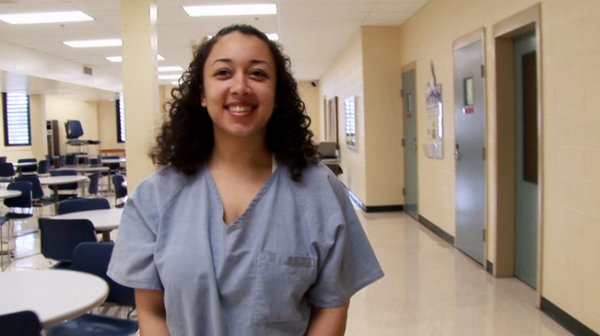 Courtesy Wikipedia
Cyntoia Brown-Long has advocated for juvenile sentencing reform since then-Gov. Bill Haslam commuted her life sentence in 2019. She has also written in support Tyshon Booker, whose case is being considered by the Tennessee Supreme Court.
Listen
Share:

The state Supreme Court is considering a case that could pave the way for nearly 200 people to be released from prison for crimes they committed as juveniles.

Tennessee has some of the harshest sentencing for minors who are convicted of murder in adult court.

Tyshon Booker was 16 years old when he was sentenced to life in prison for shooting and killing someone during a botched robbery in Knoxville.

He was convicted of murder. Under Tennessee law, that means he has to serve at least 51 years of a life sentence, even though he committed the crime as a juvenile. Attorney David Esquivel says that goes against recent rulings from the U.S. Supreme Court, which say teens must have a “meaningful opportunity” for life after prison.

“Giving Tyshon Booker the chance to leave prison when he’s 70 years old, after having spent his entire life in prison, and the health consequences of that, and the loss of his entire life doesn’t meet that standard,” Esquivel says.

Under his current sentence, Booker is expected to be released in 2074, according to his profile on the Tennessee Department of Correction website. By then, he’ll be 75 years old.

“His story is typical of the 200 or so juveniles — children, really — who have been convicted of crimes and, because of this sentencing statute, have no opportunity to rehabilitate,” Esquivel says. “The thing that they did when they were children, or at least the thing that they were convicted of, came at a time when they had the possibility of changing. And the law doesn’t allow for that.”

Tennessee’s mandatory minimum sentences gained national attention when celebrities like Kim Kardashian West and Rihanna took to social media to call for the release of Cyntoia Brown-Long in 2017. Brown-Long had been sentenced to life in prison for shooting a man she says was reaching for a gun after paying her for sex when she was 16.

The system has failed. It’s heart breaking to see a young girl sex trafficked then when she has the courage to fight back is jailed for life! We have to do better & do what’s right. I’ve called my attorneys yesterday to see what can be done to fix this. #FreeCyntoiaBrown pic.twitter.com/73y26mLp7u

“I am hopeful serious consideration of additional reforms will continue, especially with respect to the sentencing of juveniles,” Haslam said in a statement at the time.

Brown-Long’s case didn’t end up changing state law, nor Supreme Court precedent. But if the court rules that Tennessee’s sentencing laws are unconstitutional in this latest case, it could provide a path out of prison for all of the other Tennesseans sentenced to life as juveniles.

Calls for juvenile sentencing reform have gained momentum in recent years, as scientific research has uncovered differences between teen and adult brains.

“First, children have a ‘lack of maturity and an underdeveloped sense of responsibility,’ leading to recklessness, impulsivity, and heedless risk-taking,” U.S. Supreme Court Justice Elena Kagan wrote in a 2012 opinion, Miller v. Alabama.

Kagan argued that minors are also more vulnerable to “negative influences and outside pressures.”

But courts in Tennessee have repeatedly ruled that case does not apply because Alabama’s law allowed no chance of release, whereas Tennessee permits early release after 51 years. In a wide-ranging decision, Tennessee’s Court of Criminal Appeals applied that logic to Booker’s case last year.

“The Defendant argues that ‘an automatic sentence of life imprisonment (with release no sooner than fifty-one years) is unconstitutional for a juvenile,” the court wrote. “While we understand the Defendant’s argument, we must reject his invitation as we are bound by court precedent.”

Esquivel says 185 people are currently serving life sentences in Tennessee for crimes they were convicted of as teens. And, like Brown-Long and Booker, a disproportionate number of them are people of color.

Out of the 132 juveniles who have been sentenced to life imprisonment since July 1, 1995, nearly 80% were Black, according a brief submitted to the court by the Tennessee Conference of the NAACP. In contrast, Black people make up about 40% of prisoners and just 17% of the overall state population.

The NAACP found that the numbers are especially stark in Tennessee’s largest counties. All 47 teens sentenced to life in Shelby County since July 1995 were Black. It was seven out of eight (87.%) in Hamilton County; eight out of 10 (80%) in Knox County; and 17 out of 22 (77%) in Davidson County.

“There can be no dispute that racial bias infects the juvenile justice system, resulting in the grossly disproportionate imposition of adult life sentences on Black children,” the NAACP wrote. “Tyshon Booker’s case offers this Court the opportunity to ameliorate one of most severe effects of racial injustice in the juvenile justice system by declaring that Tennessee’s 51-year mandatory minimum life sentence for juveniles is unconstitutionally cruel and unusual.”

State Sen. Raumesh Akbari has introduced a bill that would allow people sentenced to life as juveniles to ask for parole after serving 20 or 30 years. The bill went to committee in 2019 but never received a final vote.

Gov. Bill Lee’s Criminal Justice Investment Task Force also recommended that the state rewrite its sentencing code during the 2021 legislative session, citing an increase in the prison population due to longer sentences.

Lee has frequently expressed support for criminal justice reform, though many of his proposals have been postponed during the pandemic. His office did not immediately respond to a request for comment regarding juvenile life sentences.

Correction: An earlier version of this article inaccurately described how people sentenced to life imprisonment for murder can become eligible for release. According to a 1995 Tennessee law, they can be released after 51 years if they have earned enough sentence reduction credits, not parole.