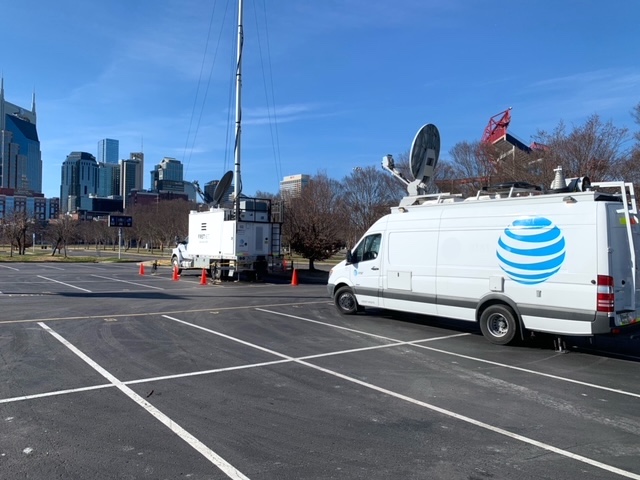 AT&T says it has restored the majority of its wireless, home internet and video services. And the utility also says it’s waiving data overage charges for customers in parts of seven states affected by the Christmas Day explosion in downtown Nashville.

In an update on Monday morning, the company says it has restored power to most of the floors of its damaged transmission facility on Second Avenue North. Additional recovery support trailers have arrived, and AT&T has scaled back its portable cell sites to 11.

In an earlier update shared Sunday evening, the company said wireless and prepaid cell customers in parts of Tennessee and other affected states won’t have to pay overage fees through Dec. 31. AT&T says users may still receive alerts that they’ve exceeded their plan, but that waived charges will appear later in their accounts.

The update also gives some clarity on why service went out several hours after the bombing Friday morning, which occurred just outside an AT&T building on Second Avenue. That facility, AT&T says, “includes connection points for regional internet services as well as local wireless, internet and video.”

Immediately after the explosion, temporary battery power kicked in to keep service going. But “a combination of the explosion and resulting water and fire damage took out a number of backup power generators intended to provide power to the batteries,” AT&T says.

“More than 48 hours later, some customers are still experiencing outages. We know it is frustrating and we apologize for the inconvenience.”

Crews have restored power to several floors of the damaged facility. Three feet of water had to be pumped out of the building earlier.

It’s still not clear whether the building was the target of the explosion that tore through the area early on Christmas morning, though in an interview with CBS’ “Face the Nation” this morning, Mayor John Cooper referred to the bombing as an attack on infrastructure. The explosion has caused service outages across a wide swath of the Southeast, in places as far away as Lexington, Ky., and Huntsville, Ala.

Several 911 networks in Middle Tennessee and beyond were knocked out by the explosion.