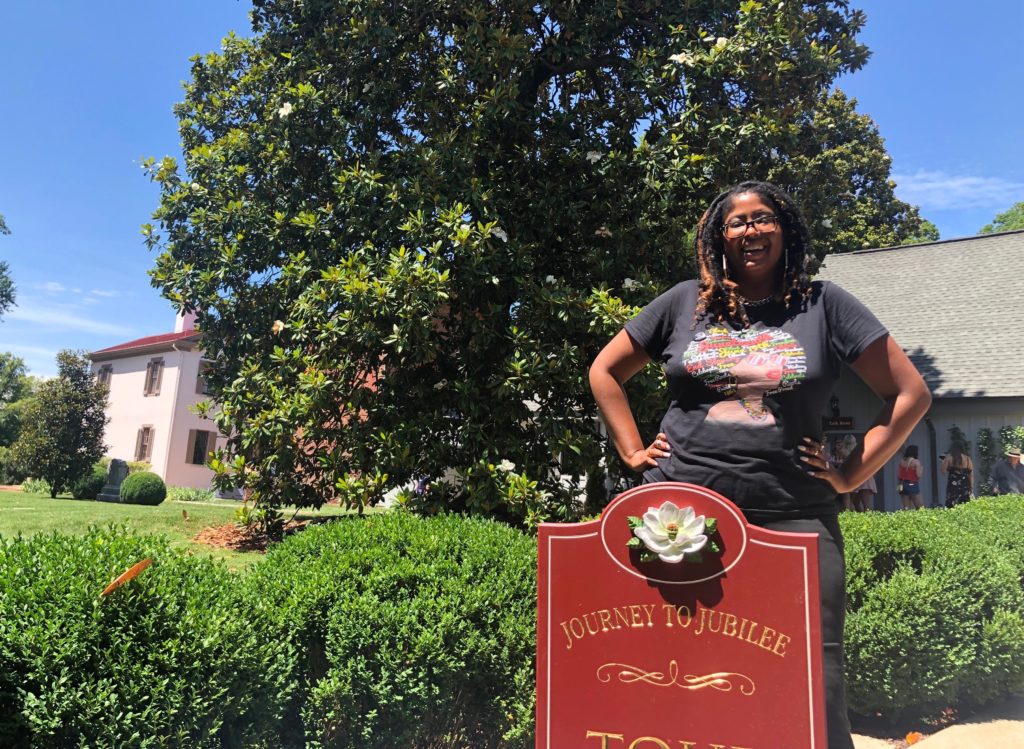 On a recent summer day, a group stands in front of the small slave quarters at Belle Meade Plantation, waiting to take a tour called “Journey to Jubilee.”

Dedicated to telling the forgotten perspectives of those enslaved on the Belle Meade Plantation, the goal is to take a walk in a slave’s shoes.

“We’re going to go all the way up to the main house, but we’re going to use all the entrances they used,” says guide Brigette Jones. “Walk through the back doors.”

This tour is Jones’ passion. When she first came to the plantation as an entry-level historic interpreter in 2015, Jones says the information on the slaves at Belle Meade, known for extravagant Southern weddings and an on-site winery, was pretty weak. So, she left her job as a tour guide to get a master’s degree in education and learn about how to tell deeper perspectives on slavery.

She acknowledges, when visitors see that a black woman is giving them their slave tour, she gets a few strange looks. Even her family was uncomfortable with the idea at first.

“My mama thought I was setting us back 400 years,” she says. “But once I got promoted, I was like this is the moment for the narrative of slaves to really come to the forefront.”

With these Journey to Jubilee tours, Belle Meade Plantation is working to correct a problem found at many plantation museums in the South, says Dr. Learotha Williams, a professor of African American and Civil War history at Tennessee State University.

Many offer no more than basic, high school-level information about slavery. They often don’t know the names of the enslaved people who lived there or the jobs they had.

“Black populations in these spaces are often times ignored or rendered invisible,” Williams said. “Explain to me how people can live there in the space for one, two or maybe even three generations, interact with the space every single day, and you don’t see any evidence at all of them being there.” But at Belle Meade Plantation, Jones has spent months researching archives across the South to uncover history that Belle Meade had never before seen. They now offer daily tours focusing on slavery.

And in the process of uncovering a forgotten history, Jones has connected more to her own family’s roots. During her research, she has traced her ancestors to a plantation close to her hometown in West Tennessee.

“I come from generations of slaves and poverty, which gave me an interest into why we were still poor so many years later,” she says.

That’s part of the reason why her slave tours are so emotional. She describes in detail where slaves slept, what their jobs were, if they escaped, if they stayed, and if they were truly happy in their situations. She makes the group put themselves in a slave’s position. She asks simple questions during the tour, that hold a deep answer.

“What was freedom supposed to look like, for a people who had never seen freedom before?”

This experience can be emotionally difficult, both for white visitors and the occasional black visitor. But Jones sees a difference in how they respond to the stories. “When white people cry their tears are rooted in the fact that, ‘I did not know it was this bad,'” she says. “But when black people come, when I see them cry, it’s a different experience because I know I’ve done my job in telling this story so truthfully that you felt it.”

She wants all visitors to come away from the tour with a better realization of the longstanding impacts of an oppressive institution that she and so many other African Americans have experienced. And she’s paying homage to a people and their history that needed to be told in a new light.

“At some point in our family history, somebody just like this stepped out into the world one day,” she says. “And they began to define freedom for themselves, although they themselves had never seen it, so they winged it as best as they knew how.”