Either Nashvillians can’t spell, or there’s a prominent Fred Douglas that no one knows about.

That’s the premise behind a Curious Nashville question submitted by Denise Gallagher:

Who is Fred Douglas and why is there an East Nashville park named after him?

It’s natural to presume that Fred Douglas is in reference to the orator, abolitionist and former slave who visited Nashville a time or two in the late 19th Century.

Read this news account from the Nashville Union and American on September 18, 1876. The reporter describes his skin as “a bright copper color” and his hair “perfectly white.” The Republican Banner says he visited Fisk University and spoke at the “colored fairgrounds” to an audience that wouldn’t pipe down.

The trouble is, Frederick Douglass didn’t go by “Fred.” And his name is “Douglass,” not “Douglas.”

So who is Fred Douglas, who has a 7-acre park named after him in East Nashville? 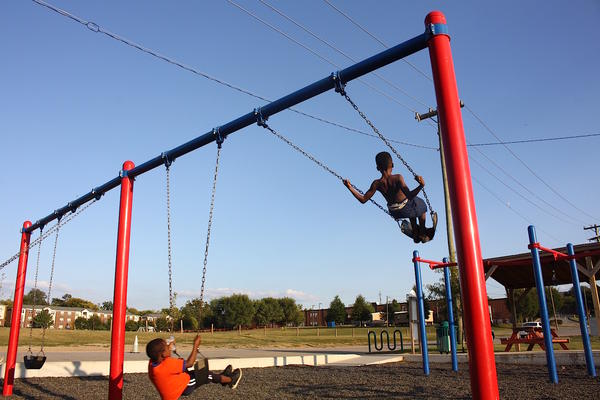 “The origin of the name is obscure,” Metro Parks spokesperson Jackie Jones says in an email.

The Park Board decided on a name at its meeting in 1935, “Douglas Park.”

“But someone with an ink pen inserted ‘Fred’ in front of Douglas,” Jones says. “No Fred Douglas prominent in Nashville history has been identified. The Park Board may well have intended to honor Frederick Douglass, but history is not clear on the matter.”

In Leland Johnson’s 1986 book about Nashville parks, he writes that the land was purchased for $2,500 as part of a Works Progress Administration project. There was a period in the 1950s where the Nashville Housing Authority took it over. And in 1963, the current park opened by Meigs School on North 7th Street.

There is now a Frederick Douglass Head Start Center next to the park. From all indications, the spelling is correct.