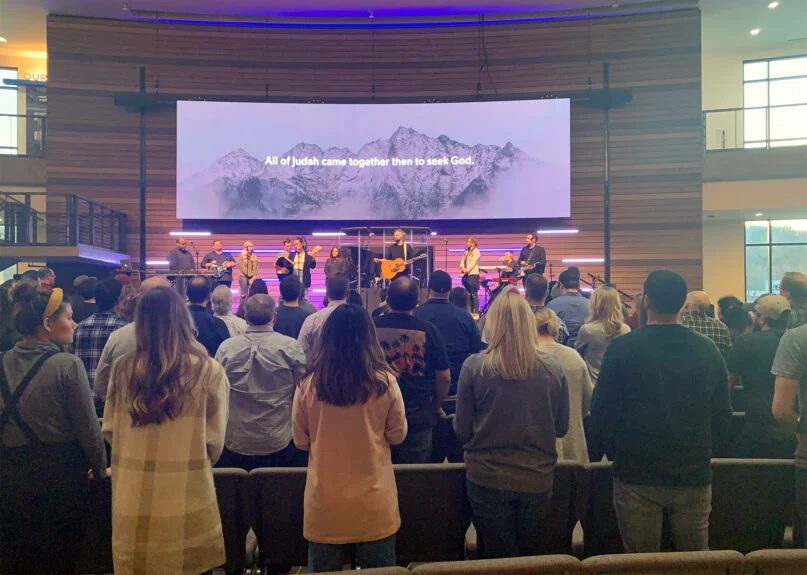 While Ramsey Solutions is not a church or religious nonprofit, its employees are periodically expected to attend worship services like this one.Bob SmietanaReligion News Service
Listen
/
Share:

Last week, Religion News Service published a story about what it’s like to work for Franklin-based financial guru Dave Ramsey. His company, Ramsey Solutions, has become known locally for rules that essentially require everyone to be a conservative Christian. And the company seems to have reached a boiling point when it comes to questioning those rules.

Nina Cardona: Dave Ramsey has a syndicated talk radio show and he sells books, curriculums and workshops all about cutting up your credit cards and keeping a strict cash budget. Much of his message is couched in conservative religion. You found that his company also uses religion to create an authoritarian and controlling workplace. Tell me a little bit about what you found.

Bob Smietana: Mr. Ramsey is pretty clear about trying to create what he calls a “godly, orderly workplace.”  They have a very strict moral code. They interview spouses. They ask folks what they do on the weekend. A lot of that is aimed at finding out if [employees are] religious or not.

It’s a company that claims to be the best place to work in America. But on the other hand, if you have any problems about working there, you can be fired pretty quickly — if your spouse says the wrong thing on social media, if you file a complaint with OSHA over COVID, or if you make a comment that sounds like you don’t put your trust in the company. It’s a company that requires pretty much unquestioning loyalty and wants to have a lot of control over the lives of employees and the lives of their families.

NC: And this is a for-profit business, not a religious institution, correct?

BS: Yes, a for-profit business that really functions in a lot of ways like like a church. While I was working on the story, one of the last things I did was go to what was basically a worship service, which was not socially distanced and no masking. It was about their calling as employees and how the evil, toxic, money culture was their opponent and God was on their side. In their communication with employees, it’s pretty clear: “This is what we think the Bible says, and you have to follow it.”

NC: Most recently, Ramsey has been very vocal about COVID and his unwillingness to abide by public health guidelines. How has that played out with his employees?

BS: One employee, for example, his spouse has asthma. She posted, on Facebook, a kind of innocuous comment, “I’m a little concerned about my husband’s employer demanding that everyone go back to work.” He was fired for that. It’s been very negative, very much, “If you believe this is serious, you’re giving into fear.”

NC: Now, you’ve been reporting from Nashville for many years. You were at The Tennessean. Now you contribute to major outlets focused on religion, but based out of here. I know you’ve been aware of Dave Ramsey for quite a while. Have you reported on him before this?

BS: I’ve reported on him a couple times. Back during the recession, we did a story basically describing his work as a kind of prosperity gospel, because it really is. It is, “If you follow these rules, you’re going to get rich. These are God’s rules.” He was speaking at a big event; I went down, introduced myself, asked for an interview. He was at odds with The Tennessean over them dropping his column and refused to talk to me.

I have followed him since, tried to figure out how to get in there. It’s a company where if you leave, you have to sign an NDA [nondisclosure agreement]. Folks there are not allowed to make any negative comments. That’s labelled gossip there. They’re fired for that. So I’ve spent a long time trying to cultivate sources and trying to get someone to talk. But COVID really, I think, broke it open for people.

NC: Well, I ask about your history reporting on them because, when you reached out to Ramsey Solutions for comment, the response included a sarcastic defense of their approach. But in large part, it was a personal attack on you. It accused you, in highly sarcastic language, of being unethical, of crafting stories out of half truths, even suggested you’re emotionally fragile. What did you think when you first read that email?

BS: Well, first I thought, I can’t believe this. And then I thought, OK. I was surprised by it because it’s a company with tens of millions of dollars of revenue. I was not surprised because I have listened to Dave Ramsey talk to his employees and be very critical of people and demean them in this kind of way.

NC: In some ways, this response that clearly was meant to be refuting criticism essentially verified it in a way, didn’t it?

BS: It did. I think this just reflected the kind of culture we were talking about. I will say he has 900 employees and is about to hire 600 more; about 100 of them got in touch with me. Most of them were very polite. They said, “We love our company, we love our coworkers, we love the structure of the organization. We wish you wouldn’t write about us because you’ll harm our work.”

NC: What impact do you feel like Ramsay’s company has?

BS: First, I think it raises a really interesting question: Can the owner of a secular company who has deep religious beliefs require employees to follow their beliefs? If this was a church, they could. If it’s a for-profit company, they have limits.

And then the other question, Mr. Ramsey claims to be a management guru. He has these big summits where he’ll charge thousands and thousands of dollars. People can spend up to $10,000 to come hear him teach you how to run your company. The company says it’s a great place to work and is exporting its methods for profit around the country. It’s good to ask: Does it live up to its marketing claims? Is this a healthy way to run a company?