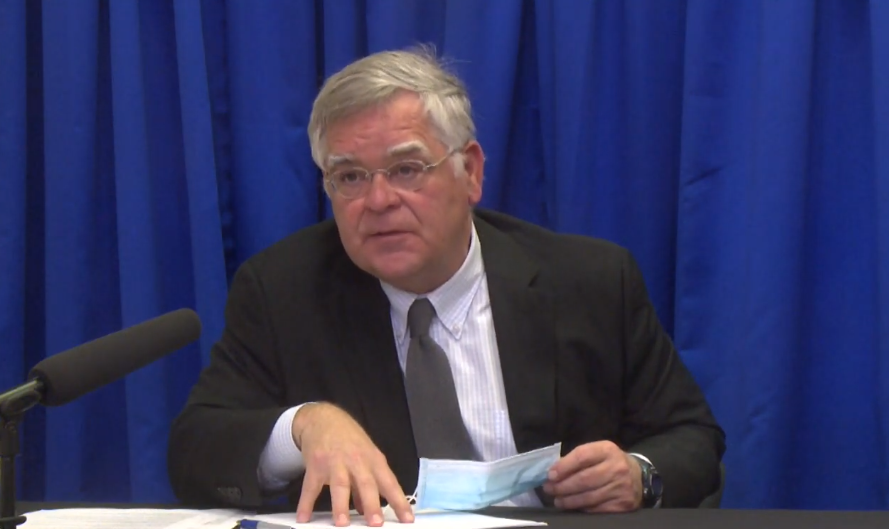 At a weekly COVID-19 briefing, Mayor John Cooper said a new bill in the Tennessee legislature would "punish children" in districts that continue with online schooling.Courtesy Metro Nashville
Share:

A bill filed in the Tennessee General Assembly would defund school districts, like Nashville’s, that remain all virtual. Mayor John Cooper said in a press conference this morning he understands the frustration behind the measure, but that lawmakers need to acknowledge the reality of the pandemic.

Cooper said he wants schools to reopen too, but they need to do it safely.

“Let’s not punish children by threatening to defund schools,” Cooper said. “Let’s keep them safe and invest in them.”

If passed, the bill (HB7021/SB7024) would withhold up to 100% of state funding through the Basic Education Program for local districts that don’t offer at least 70 days of in-person instruction this year and a full, 180-day schedule in 2021-2022. Backers say in-person classes are needed to keep students from falling farther behind.

But the mayor said it’s a “heck of a time” to threaten the resources that students will need to recover from learning losses over the past year. Cooper called on state lawmakers instead to work cooperatively with districts toward the common goal of safely reopening schools. He said he’d like to “get out of a culture of division and get to one of unity.”

Cooper also said the state should help Nashville reopen by taking steps to stifle the pandemic, like requiring masks statewide.

“I kind of want to say to the state: Help us reopen by getting us vaccine more quickly.”