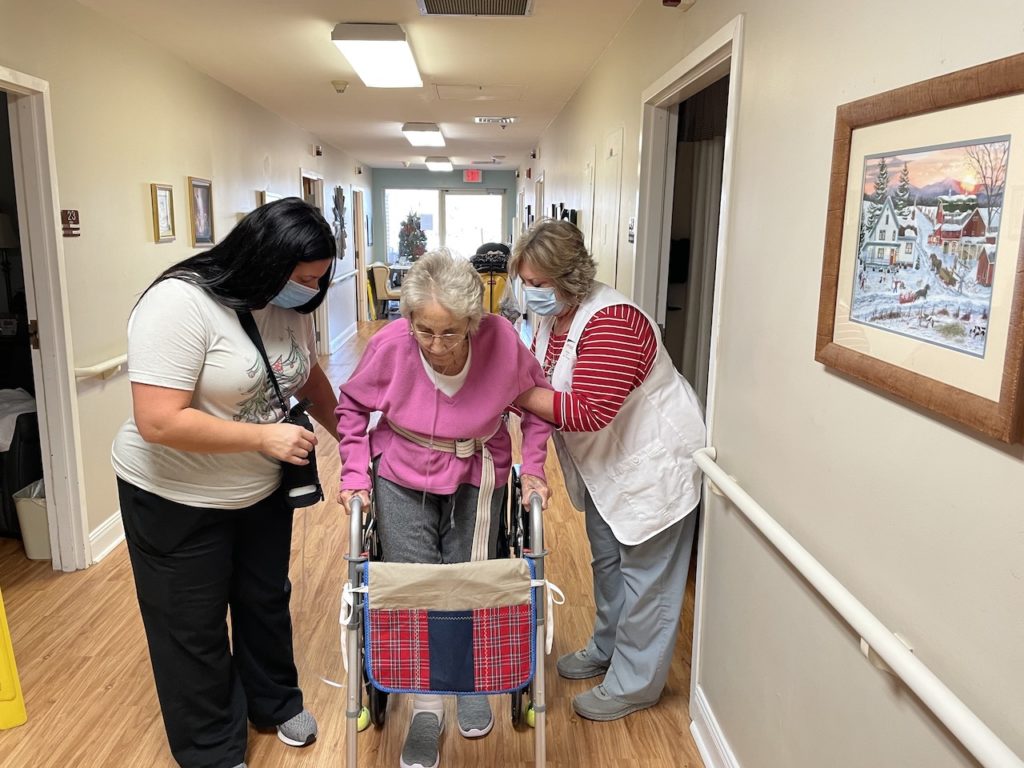 Patsy Wilkerson and Ashley Rose have a running joke that keeps them chuckling during long days working at Knollwood Manor in Lafayette, Tenn. They’re both occupational therapists working at a nursing home that is so short staffed that they’ve ended up having to help change bed sheets and feed patients — duties of certified nursing assistants.

“We’ve dropped down,” Wilkerson said of their place in the nursing home hierarchy. “We’re CNA assistants.”

And they haven’t found the bottom yet.

The 49-bed Knollwood Manor is the only nursing home in this old tobacco town. Until the last few years, the nursing home and adjacent assisted living facility was an employer that never lacked for job applicants. And people stayed a long time.

Wilkerson says for those who remain, it’s a calling.

“If you work in a nursing home and you go home and you have not had a hard day, you’ve not done your job,” she said.

And right now, there are much easier ways to make money.

Even in a small farming town, many employers are hiring and even raising pay. One CNA just left to be a grocery store clerk at Publix, Rose said. Fast-food places are paying more too.

“When you have Chick-Fil-A starting out at $19 an hour for no training and full-time, that’s more than a CNA will make,” Rose said.

At this facility, CNAs start at $13 an hour. In the current job market, not only are there very few people inquiring about jobs, but nursing home officials said some are leaving without warning.

Other CNAs have to pick up the slack, staying past their shift or coming in early.

“I’ve worked when it’s short or people are sick and don’t want to come in,” said Sindy Brewster, who has worked at Knollwood 18 years as a CNA. “I know the struggle it is for my co-workers to have to work when somebody calls out and there’s nobody to take care of these patients.”

Running short staffed really isn’t an option either because regulators could show up for an inspection at any time. And low staffing is a serious violation.

But nursing home administrators say they can’t afford to pay more. Many, including Knollwood, are having trouble keeping up their resident numbers, which means less cash flow. And they really need more help than usual because of additional pandemic duties, like periodic COVID tests for everyone in the building.

“Right now we’re taking it day to day. I know that we can’t go on forever this way,” said Linda Austin, the co-owner and administrator of Knollwood Manor.

Her facility, along with most of the country’s 14,000 nursing homes, received grants from the federal government to get through 2020. But it wasn’t until 2021 that the staffing shortage became so critical, she says.

And she said she feels bad asking anyone to work more overtime. What they need is time off.

Austin is helping lobby for state money to help nursing homes raise pay. Across the industry, the national trade group plans to “double down” on seeking state funding, a strategy that has already proven effective in Texas.

“We’re just hoping for some help and hoping that things are going to get better,” Austin said. “We keep thinking there’s going to be a light at the end of the tunnel.”

But right now, there’s omicron and a fresh round of nursing home outbreaks, making the growing number of job openings that much harder to fill.