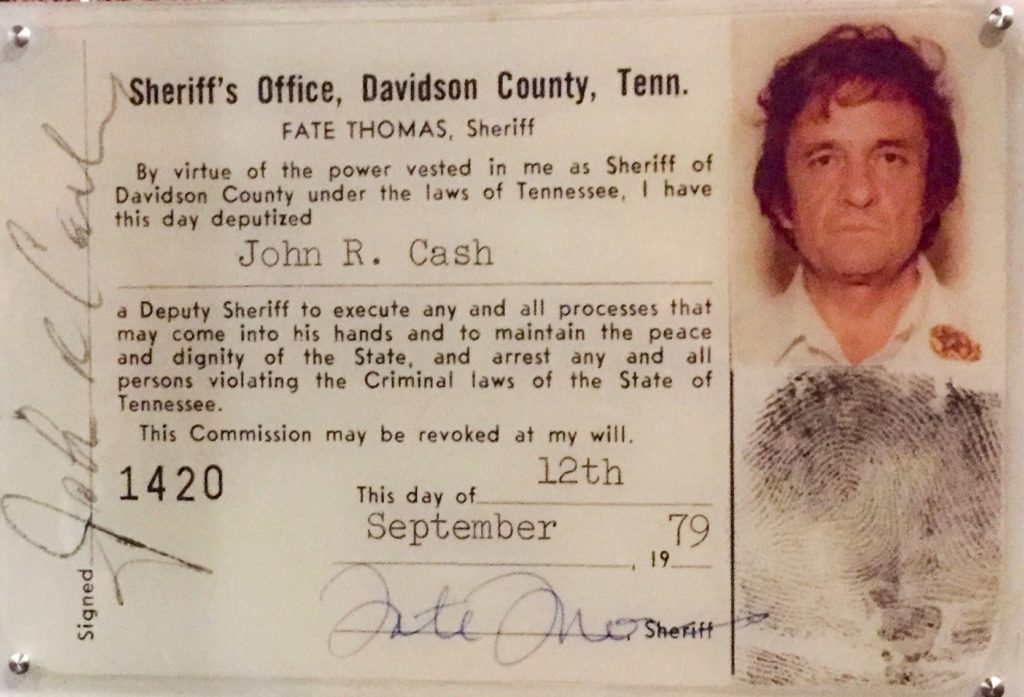 Johnny Cash earned a reputation as an outlaw after spending a handful of nights in jail for minor arrests. Contrary to popular myths, Cash was never convicted of a felony or spent time in prison – besides when he was performing for inmates.

But it turns out, the prolific country singer once actually had the power to enforce the law in Davidson County.

Sheriff Daron Hall presented a newly discovered copy of the musician’s official ID as a sheriff’s deputy this week at the Johnny Cash Museum downtown.

Cash’s criminal background was clean enough to be hired as a Davidson County sheriff’s deputy in September of 1979.

Hall says the ID – with Cash’s swooping signature and inky fingerprint – was no honorary gift. It came with real power. But he doubts Cash was particularly eager to lock people up.

“I think he would have been more interested in what can we do to help the person that is about to be arrested than to have arrested a whole lot of people,” Hall says.

Several of Cash’s songs, like “Folsom Prison Blues,” humanized the experiences of those behind bars. He even recorded two live albums inside of prisons that both hit No. 1 on the Billboard country charts.

“There are probably tens of thousands of people alive today still who were inspired by this great man going into a prison and taking them out of that prison for that three hours that they sat there, forgetting where they were,” he says.

One of the inmates in the audience at Cash’s performance at San Quentin State Prison, in 1958, was country music legend Merle Haggard, “who, until the day he died, credits Cash for that moment in time where he knew that there could be a different life outside of prison,” Miller says.

The singer also used his clout as a famous musician to push for prison reform. He met with multiple political leaders, including Richard Nixon and Ronald Reagan.

“Long before it was sexy to say that, he was talking about it,” Hall says.

But the sheriff adds that Cash’s activism was about more than the music.

“He was doing it not for his own commercial appeal, but trying to carry a message of — his exact words, I think, were that prisons do no good if you don’t do good for people who are in prison.”

“We’ve tried to take that into our own philosophy,” he says. “I hope he would be proud of what we’re trying to do.”

An image of Cash’s sheriff’s deputy card will now hang in the museum, among glass cases filled with antique guitars and framed records. It adds yet another complicating layer to a man once dubbed “a walking contradiction.”